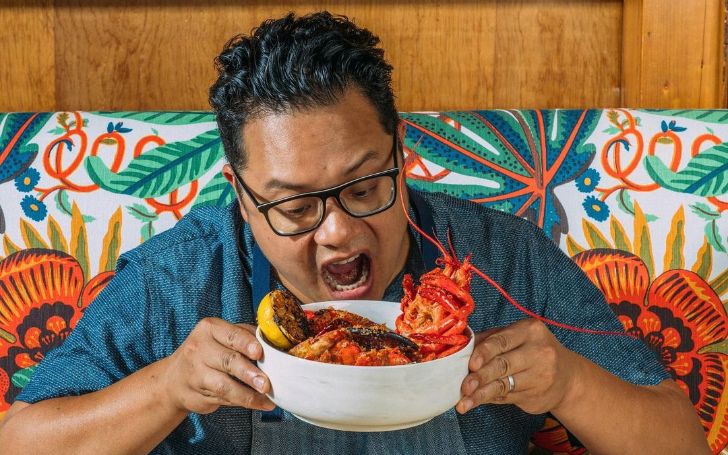 You’re visiting ALLSTARBIO. As the name indicates, this site has everything you’re looking for, from celebrity singer stars to politician stars, and many more.

Today, we present you with the celebrity chef star. Further, grab every detail about one of the most mind-blowing chefs, Dale Talde.

Born on October 25, 1978, in Chicago to Filipino parents, chef Dale Talde has had a passion for cooking since a young age.

As he grew up in a family’s culinary heritage by cooking alongside his mother, Dale also enjoyed the life of a typical American kid.

He embraces the richness of his Filipino heritage as well as American experiences to his menus and hospitality. His connection to culture and the arts is a solid yet subtle thread that runs through all of his manifestations.

Chicago native came to prominence while competing in reality television cooking competition on two seasons of the Bravo series Top Chef: Top Chef: Chicago in 2008 and All-Stars in 2010-11.

Apart from the Bravo series, Dale Talde competed on Chopped, Iron Chef America, Knife Fight. Furthermore, he was also the head judge on Knife Fight Season 4. Likewise, a guest on both Chopped and Beat Bobby Flay.

Graduating from the Culinary Institute of America in 1998, Dale subsequently helped open the popular restaurant, Jean Georges Vong, in his hometown Chicago. He also worked with notable chefs such as Carrie Nahabedian and Shawn Mcclain.

Talde moved to Newyork in 2005 to open Morimoto with a Japanese chef, Masaharu Morimoto. Similarly, He partnered with David Massoni and John Bush and opened the restaurant Talde in Park Slope, Brooklyn, in January 2012.

Following the success of their New York City restaurant, they opened a Talde branch in Miami.

After a year, Dale Talde allied with John Colaneri and Anthony Carino, who are reality show stars, opened a Talde restaurant in Jersey City. In 2016, Talde launched his first project Manhattan with the launch of Massoni at the Arlo NoMad Hotel.

Likewise, his second Manhattan restaurant Rice & Gold launched in 2019 at the 50 Bowery Hotel in Chinatown. He also has three outlets in the West Palm Beach food hall Grandview Public Market known as The Corner, Clare’s, and Little Red Truck.

Has an estimated networth of 5 Million!

Chef Dale Talde holds a networth of approximately 5 Million. He has amassed this hefty amount involved in the business for more than two decades.

Moreover, Dale earns a handsome amount from endorsement and partnership. He has partnered with numerous leading brands such as LG and Smartwater.

He also published his first cookbook Asian-American. In this book, he reveals the recipes that made him famous. In addition, Talde and his wife, Agnes, became business partners and opened Goosefeather in Tarrytown, New York.

The couple has a cute 3-year-old son together.

Filipino-American chef, Talde is a 43-year-old handsome and healthy hunk. He is active on ig as @daletalde with massive followers of 46.1k. Similarly, on Facebook and Twitter.

Celebrity chef Dale Talde’s wife, Agnes, is an Award-winning journalist and Tv host. You may find her on Ig as @agneschung and also on Twitter.