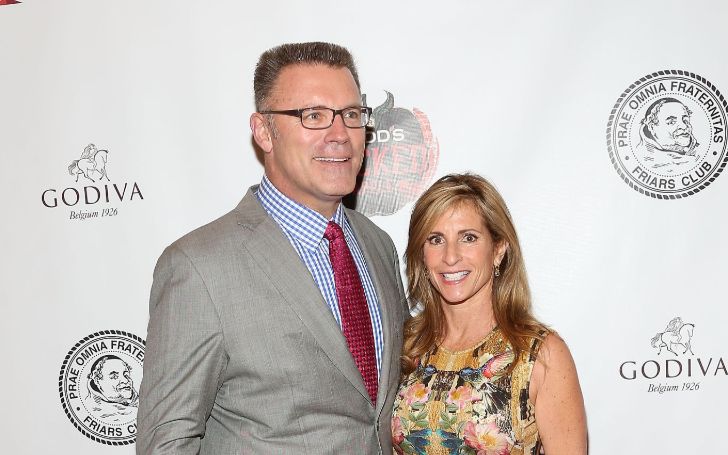 By Profession, a Lawyer but mostly recognized as the most loving wife of  Hall of Fame defensive end Howie Long. Moreover, Diane Addonizio is the mother of three!

Further, Grab details on the loving wife of Howie Long.

He retired from Football and stepped into acting and Broadcasting. The former Football defensive end serves as a studio analyst for Fox Sports’ NFL coverage.

Coming to the point, Diane and Howie have been married for nearly four-decade. They met during their freshman year at Villanova. After dating for several years, Howie Long went down on his knees and proposed to Diane for a marriage.

Diane was filled with happiness. Eventually, the answer was a YES! Therefore, The lovely couple walked down the aisle in 1982. Since then, Diane and Howie have shared an incredible bond embracing a blissful marriage.

Diane Addonizio Is A Proud Mom!

Diane and Howie share three children. After three years of marriage, the pair had their first child, a son. Almost everybody who watches Football might be familiar with him. His name is Chris Long.

Long is a former American football defensive end. He played in the National Football League for 11 seasons. Chris retired after the 2018 season on May 18, 2019.

In addition, Chris is a handsome and dashing 36-year-old married hunk. He was married to Megan O’Malley on June 22, 2013.

Moreover, the pair have had their first child, a son, on March 2, 2016. His name is Waylin James Long. Similarly, Their second son was born on November 26, 2018. His name is Luke Redding Long.

Diane’s second son is Kyle Long, born on  December 5, 1988. Kyle is an American football guard for the Kansas City Chiefs of the National Football League. Besides, He co-hosts a weekly talk show on NASCAR.com’s YouTube channel.

Moreover, Kyle became a studio analyst for CBS Sports Network’s That Other Pregame Show. Also, He is a part-owner of esports team Mode Motorsport in the eNASCAR Coca-Cola iRacing Series.

Furthermore, Diane’s youngest son is Howard Long, Jr. He is a 31-year-old charming businessman and football operative for the Oakland Raiders.

Diane Addonizio hasn’t revealed her networth so her income and networth remain unknown. However, her husband, Howie Long holds a hefty networth of $16 Million. He had amassed millions through his successful career in football, acting, and television personality. In addition, Long’s salary is $4 Million.

Besides Football, his movie credits go to numerous action films including, Firestorm, 3000 Miles to Graceland, Broken Arrow and more.