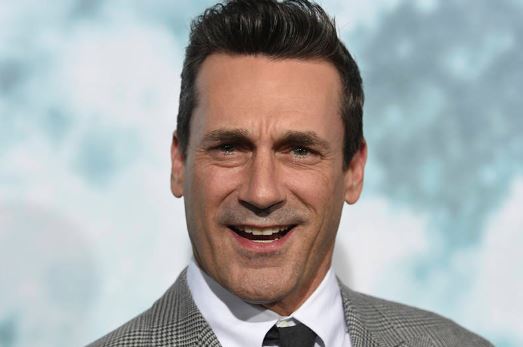 Jon Hamm is an American actor who is best known for playing Don Draper in eight long years running drama series Mad Men. He has acted in some of the notable movies such as Tag, Beirut, The Jesus Rolls, Top Gun: Maverick, & Richard Jewell. Moreover, he is the prime face in the television with series such as Related, The Unit, The Sarah Silverman Program, The Simpsons, and dozens of others.

Along with a great name and fame, Hamm has earned an extraordinary amount from his career. Hamm is considered as the sexiest man alive by various magazines such as People, GQ, Entertainment Weekly, and Salon. So what is his current status? To unlock the queries continue reading the article below:

Jon Hamm was born as Jonathan Daniel Hamm on March 10, 1971, in St Louis, Missouri. Born to father Daniel Hamm, who managed a family trucking company and his mother, Deborah Hamm was a secretary. The 48-year-old actor belongs to German, English and Irish descent with his surname from some part of Germany.

Hamm had a tough childhood since his parent’s divorce when he was two years old. After that, he started living with his mother in the suburb of Creve Coeur. Sadly his mother passed of stomach cancer when he was 10 years old after that he went on to live with his father in Missouri who died when he was 20.

Hamm attended John Burrough school where he was cast as Winnie the Pooh at the age of 16. Although he enjoyed the experience, Jon never took acting seriously. During school, he participated in sports such as football, baseball, and swimming. Upon graduation from school, he attended the University of Texas and got into a brawl which nearly got him expelled from the University.

Later he enrolled at the University of Missouri where he got the offer from the theater company. Without hesitation, he took the audition and got the introductory role in A Midsummer Night’s Dream.

Although Hamm has had multiple relationships in his most successful television show Mad Men, the 48-year-old actor is currently single. Saying that he was in a relationship with actor Jennifer Westfeldt. Although the ex-couple never married they stayed in a long relationship which lasted over two decades. When asked about his belief in marriage Hamm told in his own words:

“Marriage is more important for people when they’re having children than those who are in long-term relationships, without kids in mind.”

They dated from 1997 before separating in 2015. More to that he shares a close relationship with Jennifer and when asked about breaking up after such a long time Hamm said:

“It’s hard to be single after being together for a long time. It’s really hard. It sucks.” Hamm also said, “’I may be a narcissist in the way that most actors are, but I think it’s not to the detriment of those in my life. I try to be a good friend, a good partner, and all that stuff.”

Hamm dated Twilight actress Sarah Clarke during high school days. However, they separated after dating for a couple of years. They remained friends even after breaking up and worked in the same movie industry.

Furthermore, Hamm was linked with actress Tina Fey after the media spotted them together several times. Later the duo explained their relationship to be more than friends which is not lovers but best friends.

What about his Net worth?

Jon Hamm has a fortune of $30 million. He is a renowned and respected face in the television industry. He earned $75,000 from the episode during his initial career while playing in Mad Men. Later during the final year of the successful series, he earned $2,75,000 from an episode. Likewise, he has showcased acting skills in some of the highly successful movies and television series. Some of his movies collection are:

Also, Hamm earned $3.4 million after selling the L.A Los Feliz area house. The actor co-owns the space with ex-wife Jennifer Westfeldt, and it is available for rent for a cool $14,995 per month. The former couple purchased the luxurious space back in June 2013 for $2.45 million. As of now, Jon is focused on his future project Wild Mountain Thyme which is under post-production.