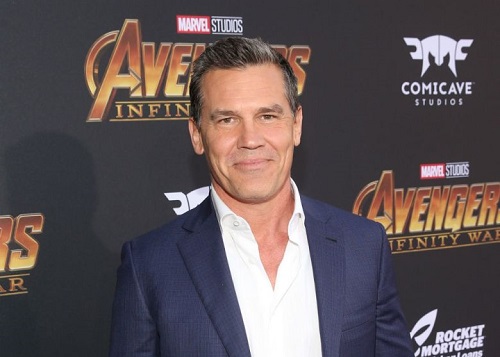 If you are a fan of Marvel Cinematic Universe, then you might probably know who Joshua James Brolin is. Brolin is credited for movies like Avengers: Infinity War and Endgame, Deadpool 2, Men in Black 3, and Sicario. Portraying the role of Super Villain Thanos gave him a wide range of fan base around the world.

Brolin is married three times in his lifetime and is the father of three children. His blockbuster roles in movies have gathered more than $3 billion at the box office. What is the net worth of Brolin?

Who Is Josh Brolin? His Bio And Height

Josh Brolin was born on February 12, 1968, in Santa Monica, California, USA. Joshua was born to his parents James Brolin and Jane Cameron. Brolin comes from the background of acting as his father was an actor.

His parents got separated when he was in his teenage years and during that time, Josh involved in drugs. Brolin went to Templeton High School and later shifted to Santa Barbara High School.

Joshua is currently 51-years-old and stands tall at the height of 5 feet 8-inch. He is of American nationality and belongs to white ethnicity.

After graduation, Josh Brolin began his career in 1985 with the film The Goonies. The film was directed by Richard Donner. His role as Brand Walsh was appreciated by the audience and following the success, he got the role in Thrashing.

Yo, just want to shout out to #metgala2019 and my peeps who all made it happen. @narrativepr Liz Mahoney and @samanthamcmillen_stylist @kimverbeck and all my hot af really really famous people friends: @mileycyrus (keeping mine in my mouth!) @jaredleto (you can carry my head anytime, brah) @kendalljenner (you gotta stop widdat wild smack talk back talk hack talk sister gimme lipstick comon’) and @versace Thank you for giving me @chrishemsworth suit cuz we the same size and he’s busy losing weight. I got pictures for later from the inside — the things I seen. Oh, and @marvelstudios thanks for the gauntlet loan out for the night. You people have been straight up tight af. Out. Purple. ?✊️ ・・ #bitchbestraightupwinning #infinityhoes #onehundredandfirstTIMEmag #fortheswagbag #teamthanos ? @bosslogic

In addition to his roles in movies, Josh acted in many tv shows such as Highway to Heaven, Gang in Blue, Private Eye, and The Young Riders. Josh appeared in many villainous roles in his careers like in films Planet Terror, Milk, American Gangster, and Wall Street: Money Never Sleeps.

After 2010 onwards, Josh played in big roles giving him fame across the globe. Brolin played as Agent K in Men in Black 3, Gangster Squad, Thanos in MCU film Avengers: Age of Ultron, Infinity War, Endgame. Josh also signed a 4-year contract with 20th-Century Fox to play the character of Cable which was introduced in the movie Deadpool 2 alongside Ryan Reynolds.

Besides that, Brolin produced a documentary called The People Speak in 2009 and directed short film X in 2010. Currently, Brolin is in the shooting of his new film Dune.

The 5 feet 8-inch tall actor Josh Brolin got married three times in his lifetime. At first, Josh married actress Alice Adair in 1988, however, the relationship did not last long as they split up in 1994. The pair are the proud parents of two children but the details about their children are not known.

After the divorce, Josh had an affair with actress Minnie Driver and also got engaged for six months. When the relationship ended, Brolin started to focus on his career and until 2004, he found love with actress Diane Lane. He married the actress on August 15, 2004.

Thinking of you. Loving you. Inspired by you. Appreciating you. It’s Mother’s Day and you are the one living person I have on this planet I can proudly call Mom. I’m so glad we’ve found our niche. It means the world. And your care for Westlyn (who is such a personality now, it’s hilarious) is palpable. We are having a ball here. Europe is just a more sensual existing. It’s a people place, not a status place. It’s been a wonderful time. Love you today and everyday. Happy Mother’s Day. Thank you for treating me like a son. xoxoxox Josh ——— #repost @barbrastreisand ・・・ Thank you for the wonderful Mother’s Day note honey. From my younger son… Josh ❤️

The couple ended their relationship in 2013 and ignited love spark with his assistant and model Kathryn Boyd. Brolin married Kathryn Boyd on September 24, 2016, and their love grew even more after the birth of their child. The pair welcomed their child Westlyn Reign Brolin on November 4, 2018.

What Is Josh Brolin’s Net Worth?

Josh Brolin has accumulated the wealth of $35 million. His bank balance is in profit because of his astounding career as an actor. Josh’s overall box office collection from his films in total is at $3,449,570,040 from which he has garnered his gross net worth.

Brolin’s current ventures as Thanos in MCU has got him the fees of $5 million and a similar amount for his role as Cable. Josh Brolin has 2.7 million followers on Instagram from which he earns more than $3,000 per post.

Brolin currently lives in a luxurious Hollywood Mansion worth more than $3.5 million. The details regarding his cars are not known yet but we can assume he drives expensive and luxurious cars. Additionally, his wealth is also added because of his trading in the Stock market as well.