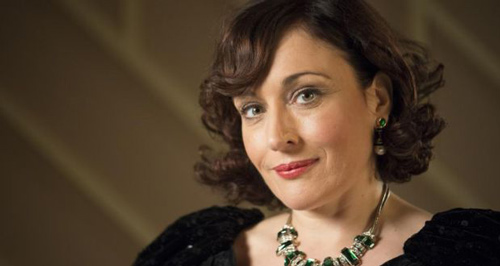 Lucy Cohu is an English award-winning actress who is famous for playing the role of Princess Margaret in the 2005 British television movie, The Queen’s Sister. She appeared as Evelyn Brogan in thriller drama series, Cape Wrath and as Alice Carter in science fiction series, Torchwood: Children of Earth. Furthermore, she is also playing television series, Maigret alongside Rowan Atkinson and Shaun Dingwall.

She married Corey Johnson but, later divorced due to some irreconcilable differences between them. From there marriage, Cohu and Johnson have two children. Who are their children?

To know further details about Cohu’s career as well as her personal life, net worth, and height, read the biography of Lucy Cohu.

Lucy Cohu was born as Lucy Anne Cohu on 2nd October 1968, in Swindon, Wiltshire, England, UK. Moreover, she is British by her nationality and belongs to white ethnicity. She attended Stamford High School and later enrolled the Central School of Speech and Drama. Despite her family’s strong military background, her parents supported her to be an actress.

Inside of Lucy Cohu’s Career

Lucy Cohu started her career from the Royal Exchange Theatre in Manchester where she was in the production of Jane Austen‘s play, Pride and Prejudice. Later, she made her debut appearance in an episode of Beggars Can’t Be Choosers playing the role of Theresa Johnson in the British medical drama series, Casualty. She also appeared in the role of Major, Jessica Bailey in the popular ITV show, Soldier Soldier. In 2005, Cohu played the role of Princess Margaret in the British TV movie, The Queen’s Sister and nominated for Emmy and BAFTA awards.

Cohu made her appearance in the British television thriller drama series, Cape Wrath as Evelyn Brogan. Furthermore, she appeared as Theo Danes in the 2007 British TV movie, Ballet Shoes. She also starred in many movies including Gosford Park, Becoming Jane, and many others. In November of 2008, she got an international Emmy award for Best Actress for her appearance in the true-life drama, Forgiven. Currently, she stars in the ITV television series, Maigret as Madame Maigret with Rowan Atkinson and Shaun Dingwall.

How much is Lucy Cohu’s Salary & Net Worth?

Lucy Cohu has an estimated net worth of $5 Million as of 2019. Moreover, her former husband, Johnson has an impressive net worth of $700 Thousand. She earns a lucrative amount of salary from her profession. However, her actual salary isn’t disclosed yet. But, we can assume that she earns a six-figure salary. Having a fruitful net worth, Cohu also earns a handsome amount of money from advertisements, endorsements, and live shows, etc.

Cohu co-stars with many famous stars including Rowan Atkinson whose net worth is $130 Million and Shaun Dingwall whose net worth is about $5 Million in the British television series, Maigret. She also appears with Mark Heap, Aidan McArdle, Hugh Simon, Fiona Shaw and many others in the series.

Who is Lucy Cohu’s Husband? Her Marriage & Children

Lucy Cohu is a 50 years old divorced woman as of 2019. She tied the knot with an American actor, Corey Johnson. Her former spouse is a famous Hollywood personality. Although being an American actor, he is largely active in the UK. His most notable roles are in Hellboy, Kingsman: The Secret Service, Captain Philips, The Bourne Ultimatum, kick-Ass and many more.

Moreover, the couple shares two children, Alexander Cohu (born on 2000), and a beautiful daughter, Lila Johnson (born on 2002) from their marriage. However, their marriage didn’t last for long and they divorced because of some misunderstands between them.

After the divorce with her spouse, Johnson, Cohu isn’t linked with any person in any type of relationship affairs. Besides, she hasn’t faced any rumors and controversies regarding her career and personal life. Furthermore, she isn’t active on social media but, she is followed by a large number of fans in her fan pages. Currently, she resides in Kensal Green in Brent, London with her children.

Having a similar surname have raised a lot of speculation between Lucy Cohu and Will Cohu. Will is a British author who has also freelanced as a writer, editor and journalist, mostly for the Daily Telegraph. Among his books, Nothing But Grass is the most sold publication.

However, the relation between Will Cohu and Lucy Cohu has not been confirmed.