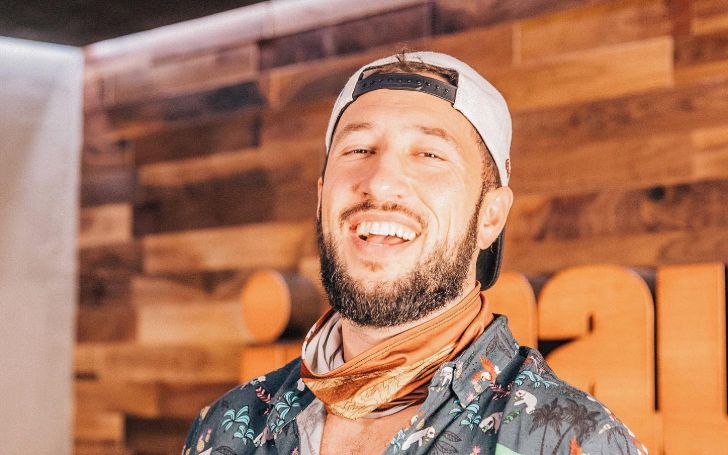 Nowadays, the internet and social media have given people a platform to change their lives. It is beneficial and fruitful that some people invest everything and have a successful career.

Mike Majlak gathered massive fame after meeting Logan Paul, YouTuber and social media personality. Together they host the podcast called the Impaulsive podcast on youtube. Currently, the podcast has 23 million subscribers on Youtube as of 2022.

Born and raised in Milford, Connecticut, United States, Mike Majlak is an American social media personality, Youtuber, Blogger, Photographer, and Author. Besides, He is a marketer and an entrepreneur.

As per his book, Mike had mentioned that When Mike was a 17-year-old teenager, he got caught up in the opioid epidemic which swept the nation.

After nearly a decade from the epidemic, his life was filled with hopelessness.

Moreover, He would spend days and nights snorting OxyContin, bullying his friends and even climbing out of cars at gunpoint.

Meanwhile, his mates from college were buying homes, getting married, having children and living normal lives.

Eventually, Mike lost the faith, trust and support of everyone who loved him as he could not escape the noose of addiction.

After all, Mike was alone, and drugs were the only company he had. Consequently, All the hope, potential and future he had was faded as the addiction was too strong to resist.

Majlak was at a point in life where he realized he wouldn’t make it. However, he did. Mike Majlak not only survived, but he thrived.

Now he is Mike Majlak, the social media personality with millions of followers. Besides, He is an entrepreneur, marketer, podcaster, YouTuber, and author.

Most importantly, the aim of writing this book is Mike wanted to share his experience to show a light for people who have dimmed their lights.

Mike Majlak is a social media personality with millions of followers. It is no surprise that people are curious to know their favorite social media star is rich. Therefore, here are the details on Mike Majlak’s career and networth.

Mike Majlak’s personality and social interaction skills have played a vital role in his life as these are the things that have made him who he is today.

First, The social media personality moved to Los Angeles and worked as a social media promoter. He worked at Nice Guy Promotions.

Simultaneously, He worked as a part-time photographer. Furthermore, The blogger worked as the marketing manager for an American furniture retailer, Lovesac.

Presently, Mike Majlak owns The Night Shift, an online clothing line. Besides, he ran a YouTube channel in 2010 but has been active since 2017.

The channel has massive subscribers of 2.6 million now as he posts his interactions with various celebrities and his lifestyle.

The Youtuber had a watershed moment after meeting the much-loved Youtuber and social media personality, Logan Paul.

The duo launched Impaulsive Podcast on October 22, 2018, on Youtube. Currently, the podcast has gathered more than 23 million subscribers.

Why wouldn’t it? Because the podcast hosts superstars and celebrities such as Ben Askren, 6ix9ine, Mike Tyson, and Jake Paul.

Mike Majlak’s networth is over $1 million!

Even though no reliable source has Mike Majlak’s salary and income, his estimated networth is around $1.5 million.

He has gathered this hefty sum as a social media personality, entrepreneur, marketer, podcaster, YouTuber, and author.

As per some sources, Mike makes approximately $382.19 thousand per year from his Youtube Channel. Besides, He makes handsome sums from his other income streams, such as podcasts and clothing lines.

In addition, he co-authored the book, The Fifth Vital with Riley highlighting his struggle with mental health, drug addiction and the solution to it.

On January 13, 1985, Mike Majlak was born in a loving, middle-class family in Milford, Connecticut. He has two siblings, Abby and Jill. His zodiac sign is Capricorn.

As for his education, he went to Fordham University but never graduated. Mike Majlak is a 37-year-old handsome, charming and smart man standing perfectly 6 feet 3 inches tall, weighing 84 kg.

Talking about Mike’s socials, the 37-year-old is active on Twitter under the username @mikemajlak  amassing huge followers 458.9k.

Similalry, the media personality is active on Instagram with 1.7million followers under the username @heybigmike. Also on Twitch and YouTube with 2.56 million subscribers.

Is Mike Majlak married? Who is his wife? Know about his relationships!

Mike Majlak is not married. Currently, Mike doesn’t have a wife or a girlfriend as of February 2022. However, The media personality was dating Podcast host and former adult film star Lana Rhoades.

Sadly, The pair broke up in February 2021 because of cheating allegations and were fighting all the time, and the relationship was draining.

Furthermore, Mike stated on a February 2021 episode saying, “When those fights become the norm for months and months and months on end, and the relationship starts to take more energy from you than it provides to your life, and you don’t see an end for either person, it’s the time that you have to start thinking about calling it quits,”

Here comes another twist, Mike’s ex-girlfriend Lana Rhoades announced her pregnancy on June 1, 2021. She had a baby son. However, Lana hasn’t disclosed the father of the child.

As Mike and Lana were together for a year, many people thought Mike Majlak could be the father.

Majlak cleared the air by posting a tweet on Twitter asking to be a guest on the Maury show. “Does anyone have a contact at the Maury show? no big deal,”. Later he clarified on the Impaulsive podcast that he is not the father.