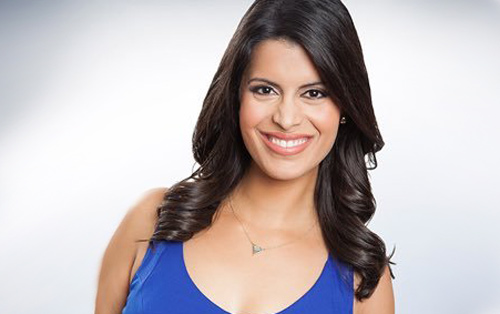 Miami is known for being the city of Entertainment and Lifestyle. And a South Floridian, Roxanne Vargas is reporting from the Miami bringing the latest news from the city. Vargas is the anchor for NBC’s Miami-Fort Lauderdale affiliate Station.

Roxanne, despite her attractive looks and charming smile, there is much to love about her. Vargas is a strong supporter of LGBTQ Rights and constantly involves in the community work. She is also the author of the book 100 Things to do in Miami Before You Die. Let’s find out about her interesting life, career, and family below.

Roxanne Vargas was born on January 23, 1984, in Miami, Florida, USA. She grew up with her brother, David A. Vargas. Moreover, she is a new anchor for NBC who graduated from Florida International University. She earned her Bachelor degree in Broadcast Journalism.

There is not much information about her father but Roxanne features her mother via her Instagram posts. She is currently 35-years-old.

The South-Floridian, Roxanne Vargas became a part of the NBC News Family in 2003 and got in the news team in 2006. Before joining NBC, Vargas worked for the Spanish-language Telemundo affiliate, WSCV Channel 51.

Furthermore, Roxanne is in love with her city and at NBC as well she started promoting lifestyle and entertainment news. Her show, In the Mix started in 2012 and another Spanish show, Acceso Total on Telemundo 51. Also, Vargas co-anchored Live Miami at 11 after she got replaced with Sharon Lawson in 2018.

Best part about today??? Seeing a few of our amazing former interns, getting ready to graduate from @univmiami and take over the world. #TheU #NBC6CollegeWeek #SebastianTheIbis ????

Currently, Vargas hosts the 6 am and 9 am news on Saturdays and 9 am news on Sundays and also her lifestyle show, In the Mix, three days a week. For her impressive work, Vargas won five Emmy Awards. The Miami new times voted her as the Best TV Host in 2012.

Roxanne Vargas’s Married Life: Does She Have Any Children?

Roxanne Vargas married Danny Rodriguez and is blessed with two children. Danny works as a senior graphics producer at NBC 6. Her husband, Rodriguez grew up in Florida same as Roxanne and graduated from the Art Institute of Fort Lauderdale in 2002.

Moreover, Danny completed his course in Bachelor of science in computer animation. Before working at NBC 6, he worked for NBC Universal and Telemundo. Rodriguez used to work in the graphics department.

In 2014, Danny and Roxanne welcomed a baby boy Julian and in 2016, another child, Sebastian. Roxanne included her pregnancy period with Julian during her show, In the Mix and did a story on Prenatal Yoga classes.

Currently, the family is living a happy and blissful life.

How Much Is Roxanne Vargas’s Net Worth?

Similarly, Roxanne has also written a book together with Maruchi Mendez titled 100 Things to do in Miami Before you Die in 2014. The book discussed the list of things you can do in Miami and giving the insight into Miami culture.

From the sell of the book, Vargas must have earned a good sum of money. As there is no doubt that she is living a lavish life with her spouse and children.

Moreover, Roxanne received the honor of community leadership award which was given by the Girls Scouts. Vargas is also a supporter of LGBTQ Rights. She advocates about their rights and regularly attends at Pride Events. Roxanne also hosts some of the Gay Pride Events such as Miami Beach Gay Pride Ally Grand Marshal in 2018.

I see you! I respect you! I value you! I love you! I thank you! @miamibeachpride @nbc6 @nbc6pride

For her contribution to the Gay Community, she received the Pink Flamingo Award for Favorite Media Personality and the Ally Award by the Aqua Foundation for Women.