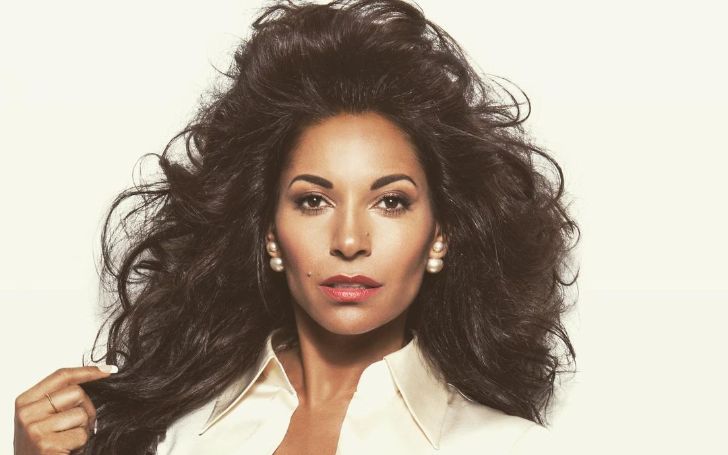 Salli Richardson is one of the proficient and beautiful coveted leading women in Hollywood. She is an incredible actress and a director.

In Eureka’s TV series, actress Salli is known to millions as Dr.Allison Blake. In addition, she has appeared in plenty of popular TV series including, Bones, House, Criminal Minds, NYPD Blue and more.

Also, Salli is best known for her work as the voice of Elisa Maza in the Disney animation classic Gargoyles.

Is Salli Richardson Married? Who Is Her Husband?

Yes, Salli Richardson is a married woman. She lives a thrilling married life! Salli is married to an amazing actor, Dondré Terrell Whitfield. Moreover, they have been married for 19 years now.

Richardson and Dondre were dating for a long time. Finally, the pair walked down the aisle on September 8, 2002. Since then, the pair have been together and have had a happy home and blissful marriage.

Furthermore, the happily married couple opened up on their love during an interview with OWN’S Black Love, revealing that Salli was the first to say “I love You.”

Honestly, it is pleasure to see the Hollywood married couples still in love and going strong.

Do Salli & Dondré Whitfield Have Children?

Of course! Salli Richardson and Dondre Whitfield are blessed with two beautiful children. The couple’s first child was a daughter, on September 3, 2004.

Her name is Parker Richardson Whitfield. She is as gorgeous as her mother.

Parker is 17 years old as of 2021. Her mother, Salli, recently posted a pretty picture with Parker wishing her a happy birthday stating, my beautiful baby is 17 and has her driver’s license. God couldn’t have graced me with a better daughter.

Likewise, The lovely couple had their second child, a son, on January 24, 2009. His name is Dre Terrell Whitfield. He was born weighing in at 7 lbs.,7 oz.

On November 23, 1967, Actress Salli was born in Chicago, Illinois, U.S. In 1985 Salli passed out from the University of Chicago Laboratory Schools.

Currently, she is active on Instagram under the username@sallirichwhit having massive 232k fan followers.

How rich is Salli Richardson? Know her Networth.

Richardson always wanted to act from an early age. Her mother took her to her first audition at the age of four. Salli blew away the judges in the audition with her singing and acting talent.

Therefore, she was offered one of the lead roles. Since then, Salli has been in the entertainment industry.

Actress and director Salli certainly amasses a hefty sum throughout her career. As of 2021, she holds a whooping networth of $2 Million.

Importantly, all the credits go to her hard work and dedication in her works. Salli began her professional acting career at the Kuuma Workshop in the theater in Chicago.

She performed on stage with CCH Pounder in the Old Settler at the Pasadena Playhouse. Subsequently, appearing in some motion pictures, she took down recurring roles in Mercy Point for Columbia Tristar and Rude Awakening on Showtime.

More on the actress’s career,

After graduating high school, Sali worked in a restaurant, hoping to save money to buy a car. She wanted to buy a car to drive to LA and achieve her dream of becoming an actress.

Soon, Salli got work as a featured player here and there in movies and guest-starring parts on a few select TV shows.

Finally, her massive break came after casting in a strong supporting role in the feature film Posse, opposite Billy Zane and Blaire Underwood.

Since then, Richardson’s career has been on a stable journey. She won an Image Award and an Independent Spirit Award in 2003 for her role opposite Denzel Washington and Derek Luke in Antwone Fisher.

Besides, she also starred in roles in DreamWorks’ Biker Boys opposite Laurence Fishburn and Anacondas: The Hunt for Blood Orchid, the Sony Picture’s unexpected blockbuster hit.

The 54-year-old actress has appeared in 20+ major motion pictures, including Antwone Fisher with Denzel Washington.

Also, Low Down Dirty Shame with Keenen Ivory Wayans, I Am Legend with Will Smith. Then, Posse with Mario Van Peebles.

Equally important, Salli’s Tv credits include the main role on Family Law which was the hit series for CBS. Also, she has had a multi recurring arc on CSI: Miami, again the CBS hit drama.

Furthermore, the brilliant director Salli has directed 35 short films and Tv series. She started directing in 2011.

As mentioned above, Dondre is an actor. He holds a sizable networth of $1 Million.

He amassed this hefty sum through his career as an actor in the film industry. Dondre has been into filming since 1985.

All My children. Consequently, He achieved three Daytime Emmy Award for Outstanding Younger Actor in a Drama Series nominations for his performance on All My Children.

His film credits are altogether fifteen and thirty-seven Tv series. Dondre’s roles in some of the films and series are: