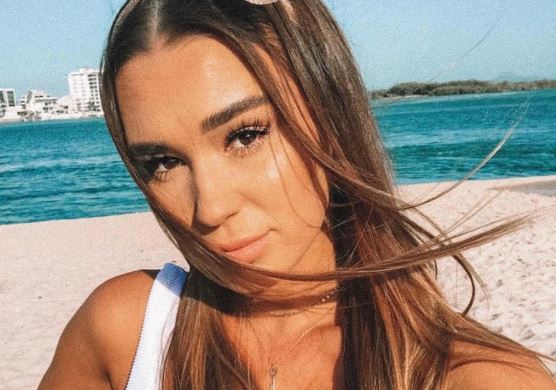 If you love wandering inside YouTube and are fond of watching makeup tutorials, you might be familiar with famous Australian YouTuber Shani Grimmond. She is a beauty blogger and a fitness instructor who provides tips about dressing up. Grimmond rose to stardom for her continuous hard work and dedication.

She has already captivated audiences with her talent, and her video on YouTube is popular with millions of views and over 1.5 million followers. What is her relationship status? To learn more about her, please read till the end.

Shani Grimmond was born in Brisbane, Australia, on March 21, 1997. There is no information about her parents and family background. She has two siblings, a brother, Kallym, and a younger sister. She holds an Australian nationality and belongs to white ethnicity. She came to the earth as an Aeries, which is why she is bold and ambitious.

Furthermore, there is no information about her childhood schooling and education. As per the report, she has always been enthusiastic regarding makeup. Followed by millions on her YouTube, the gorgeous lady has attracted many fans from around the globe, yet she hasn’t revealed much about her personal life.

Fame as a YouTuber

Twenty-four years old beautiful Grimmond started her career as a YouTuber on November 12, 2011, creating her channel ‘Shani Grimmond.’ Since then, she has loved posting her blog on makeup and fashion and showing her talent for physical fitness. She has over 1.5 Million followers on YouTube. Moreover, she has been an active user of Tumbler since she was 13.

Moreover, some of her favorite videos, viewed over a million, include ’17 Beauty Hacks Every Girl Should Know, ‘We Broke Up,’ ‘Clubbing Routine- GRWN Shani Grimmond’ and ‘Makeup Mistakes to Avoid+ Do’s and Don’t.’ Also, she is popular on Instagram, where she frequently posts pictures. Some famous YouTubers like Shani are Mr.Beast, Tati Westbrook, Joana Ceddia, and Kalya Kosuga.

On & Off relationship with Johnathon

Five feet 8-inch tall, Shani is in love with a handsome boyfriend, Johnathon Sauer. Moreover, Jonathon is a bookkeeper and famous Instagram star. Their relationship was confirmed in June 2015 from Shani’s YouTube video “THE BOYFRIEND TAG.” Since then, the couple frequently posts a photo together on Instagram.

Moreover, that doesn’t mean they don’t have up and down in their relationship. The stunning couple broke up twice in their relationship period. But, there is a  saying that if you love someone from your heart, then you can’t be able to forget each other. So, it was with Shani and Sauer. In 2016, the couple was at a stage where they completely made a final farewell. But not so long, the duo came together just a year after and was fully cherished and lovely.

Later, in 2018 there was a rumor that Shani and Jonathan broke up. Further, it was confirmed from the video of Shani on YouTube as ‘We Broke Up. However, the pair come back again with each other on the same year, Valentine’s day. For now, the couple is happily living without any rumors of breakup and separation. Even though they have had a rocky past, they live the best lives together.

Grimmond might have earned a decent amount of money from being YouTuber.Moreover, she is active on YouTube, and millions view her video. According to Social Blade, Shani earns around $10.3K to $16.4K from her channel.

She might also earn some of the money contributing to her net worth through some ads and a few product collaborations.

Moreover, her net worth is estimated at around $500 thousand. But, there is not an exact figure for her net worth. Later, in the future, we will update her net worth. Therefore, there are no details about her other assets like cars and houses. Moreover, she is currently living a lavish life happily with her family.