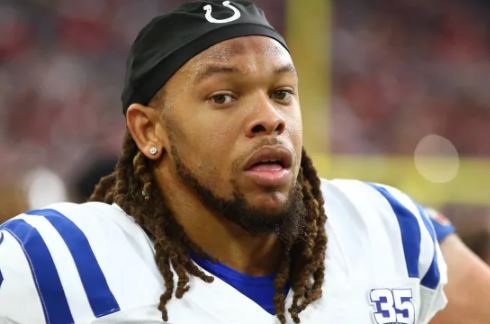 Today’s article is about American Football defensive end player Jabaal Sheard. Moreover, he plays for the Indianapolis Colts of the National Football League (NFL). Sheard played college football on the defensive end side for the University of Pittsburgh.

Moreover, he was selected by the Cleveland Brown in the second round of the 2011 NFL Draft. He is a member of the New England Patriots. Currently, he is playing for Indianapolis Colts. What is his net worth? Let us learn more about him.

Jabaal Sheard came into this world  Jabaal Lamar Sheardon on May 10, 1989, in Hollywood, Florida. He was raised by his mother, Evelyn Sheard. Sheard holds American Nationality and belongs to mixed ethnicity.

Sheard used to play high school football for Hollywood Hills High School. Later, he joined the college at the University of Pittsburg, Pennsylvania, to pursue his career in football.

Thirty-two years old, a professional footballer started his career in high school. Moreover, he used to play All-Broward County, the Defensive Lineman at Hollywood Hills. Later, he went to the University of Pittsburgh for his college football and got trained by a professional coach. Further, he earned first-team America Football Coaches Association All-American honors in 2010. Moreover, his professional career started in 2011, when the Cleveland Browns selected him in the second round of the 2011 NFL Dra

Check out Jabaal Sheard’s short video related to his game

6 feet 3 inches tall, Jabaal plays football for the Browns from 2011 to 2014. Later, he joined New England Patriots, where he was a defending player in the year 2015. He signed a contract for a two-year with $ 11 million. Currently, he plays for Indianapolis Colts and signs an agreement for three years on March 10, 2017. Furthermore, he is the most promising, respectful and fair player in NFL. James Conner, Pat McAfee, Jared Goff, and Howie Long are some other renowned football players.

Currently, Jabaal is living a single life and focusing on his passion and work rather than his personal life. Moreover, there is no information about his current relationship status and girlfriends. But that doesn’t mean he has never dated a girl in his life. The player was in a relationship with his beautiful girlfriend, Diosmary Stephany Ozuna, in the past.

Furthermore, the duo was head over heels in each other’s love and observed each other’s company in several exotic places. The lovely couple started dating in 2015, but there is no information on how and when they met. Further, it was reported that the couple dated for two years and parted ways in 2017.

Moreover, the couple also shares a son from their relationship. His name is Jayden Angel Sheard. After their breakup, his son is living with his ex-girlfriend. Further, Diosmary filed in court for custody of his son, and she got it. Additionally, Sheard pays for child support monthly, and often he keeps spending time with his child. Besides, there is no sign of his past relationship and affairs.

How much is Jabaal’s Net Worth?

Jabaal earns a big sum from his job as an American football player. Moreover, his net worth is estimated at $25 million in 2020. He makes this amount from his position in Cleveland Brown to Indianapolis Colts. He made a contract for three years with Indianapolis Colts worth $25.5 Million on March 10, 2017, with a bonus of $500,000.

Moreover, per the report, his annual salary is estimated at around $8.5 Million. Furthermore, he is living a luxurious life with his family. Moreover, there is no information about his houses, cars and other belongings.