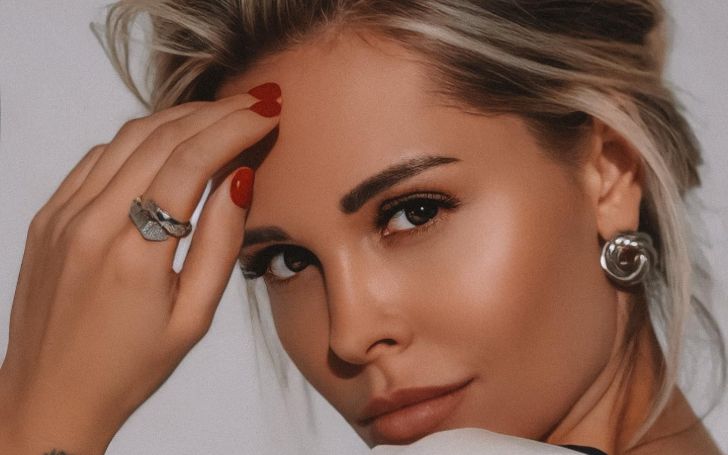 If you’ve watched a Russian comedy series Kitchen that airs on STS, you probably have seen the face of Mariya Gorban as Kristina Semionovna Nagieva.

She will be Nagiev’s ex-wife and briefly the owner of the restaurant. Kristina steals all of the money from the restaurant in season 3 and leaves it on the verge of bankruptcy.

Besides, Mariya Gorban is well known for her roles in Zhenshchiny protiv muzhchin: Krymskie kanikuly, The Sovereign’s Servant, and many others.

Further, Continue scrolling as we have gathered details on Mariya Gorban!

Born and raised in Russia, Mariya Gorban is a fantastic Russian theater and film actress. She stepped into the acting department of the RATI (GITIS).

However, she never became an actress. Her teachers turned her into a lyrical heroine for four years against her will. She played Irina in Three Sisters, Lisa in The Brothers Karamazov, Mary Stuart.

Finally, after graduation, Mariya was entrusted with the cheerful cook Nasty from Erdman’s play.

The Russian actress is best known for Joke, Purely Odessa Story, The Smile of God. Also, from the television series Kitchen, Lechu, and My captain.

Mariya Gorban was born in in Izhevsk, Udmurtskaya ASSR, RSFSR, USSR ,now Udmurtia, Russia. Her birth date is December 26, 1986. She belongs to a theatrical family.

Her father, Alexander Gorbanwas a theater actor and a director. Likewise, her mother, Larisa Zibrova, is an actress. She worked at the Youth Theater.

As for her education, the blonde beauty graduated from the Russian Institute of Theatre Arts – GITIS. Talking about Mariya Gorban’s socials, the 36 years old is active on Instagram under the username @gorban_masha amassing huge fan followers of 1.4 million.

Mariya Gorban is married but twice. First, She was married to the Russian gaffer Oleg Filatov. They tied the knot on October 22, 2013. Mariya and Oleg Filatov divorced before 2016. Unfortunately, the reason for the divorce remains behind the curtains.

After her divorce from the Russian gaffer, the actress began dating Film cinematographer and surfer Kirill Zotkin in July 2016. The pair have been together ever since.

Before the above relationships, Mariya Gorban lived in civil marriage with the Slovak defender of the Moscow Lokomotiv Jan Dyuritsa when she was 26 years old.

About Mariya’s children, she is a mother of two. Her first child is a daughter she had with her ex-husband, Oleg Filatov. Her name is Stefaniya, and she was born in September 2014.

Likewise, the actress had her second child, a son, with her husband, Kirill Zotkin. His name is Nilan, born in August 2021.

Career and Networth of the Russian Actress!

Mariya Gorban began her acting career on the screen while still a student. She appeared in the series about school life, Simple truths, from 1999 until 2003. In 2004, Gorban starred in Irakli Pirtskhalava’s video ” Time ” video.

At the same time, she appeared in several more episode characters in the series Code of Honor, Goat in Milk, Servant of the Sovereign.

As a result, Mariya had gathered extensive experience on the set by the 4th year. By the time she reached 20, the actress was offered to star in two feature films at once. Consequently, The actress’s characters turned out to be diverse.

For instance, Gorban acted the main bitch Tanya Nesterova in a remake of the painting by Vladimir Alenikov, Rally. Similarly, she reincarnated as two lyrical young ladies, Anna and Alena, in a fantastic comedy about the love of Vladimir Alenikov, The Smile of God, or Purely Odessa Story.

Subsequently, the actress appeared in the lead role in the Tv series I am Healing in 2008. She played the main character, a kind student, the adopted daughter of the head physician of a surgical center, who dreams of curing her brother of brain cancer and figuring out the cause of the car accident that claimed the lives of her parents Leru Chekhova.

Therefore, her portrayal of Leru Checkhova gathered her massive fame at 22. Since then, the Gorban starred in numerous domestic Tv series such as The Game, The Ugly Duckling; There is someone here, Reflections, and many others.

Mariya Gorban’s networth is over $5 million!

Furthermore, her other breakthrough role was in 2012. She played the role of a sly, practical girl, the former administrator of Christina, who managed to marry the boss, the owner of the restaurant Dmitry Nagiyev in the rating series of the STS TV channel Kitchen.

Mariya appeared in the title role in the mini-series My Captain in the same year as the sailor Barbara, who tames the stubborn ship captain with all her might of love.

Since viewers were drawn to Mariya’s gorgeous acting skills, she appeared in the spin-off Hotel Eleon. She also appeared in an MTS commercial in 2017.

The Russian actress Mariya Gorban’s most recent works include Women VS Man 2, Naughty Grandma 2, and The eight best dates.

After all, Mariya Gorban has amassed a hefty sum through her acting career. Even though her salary income remains unknown, Her estimated networth is over $5 million.

As a result, actress Mariya Gorban might be earning a similar sum. No wonder she lives a lavish life. We can see her IG traveling various palaces and owning luxurious cars!