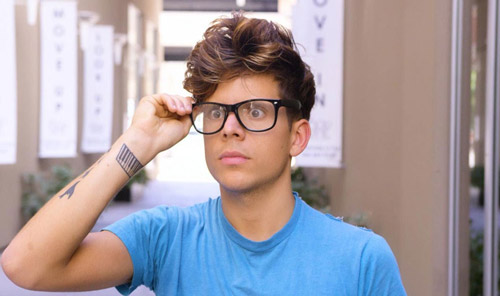 Rudy Mancuso is an American actor, Internet personality and also, a musician. Rudy is well-notable for his comedic videos on YouTube and previously on Vine. Many of his videos consist mostly of musical comedy sketches. He has over 5.9 Million YouTube subscribers, managed by John Shahidi of Shots Studios, a company that also produces his YouTube content.

Web star, Rudy initially gained fame on Vine, finishing with over millions of followers on his channel, he became popular for using his Brazilian and Italian background to hilariously mock stereotypes. Read the biography of Rudy Mancuso, to know more about his personal life, earnings, net worth and so on.

Who Is Rudy Mancuso? His Bio & Wiki

Rudy Mancuso is a famous American actor, producer, musician, comedian and also, an internet personality. He is notable for his humorous skits on YouTube and also in the Vine app. Furthermore, Rudy is also known for his special style of daring national stereotypes.

Popular internet personality, Rudy was born on 27th of February, 1992, to an Italian American father and a Brazillian mother. Mancuso was born and raised in Glen Ridge, New Jersey. He also has a sister named Isabella Mancuso and, is said to have played an important role in Rudy’s comedy skills.

Furthermore, Rudy attended Glen Ridge High School. He lived in Rio de Janeiro, Brazil for a couple of years before, going back to the States. Mancuso learned to play the piano at the age of five. He is also fluent in Portuguese, Italian, English, and Spanish.

Talking about Rudy Mancuso’s profession, Rudy mentioned in an interview, that he discovered the world of video production through music. Music is the biggest passion for him—evenbefore, he could speak, he found himself reaching for the piano. It was after, Rudy found music that he went on to discover all the other aspects of social media, it led him to become one of the most followed Vine stars.

The first video, Rudy posted on his Youtube channel was titled Hispanic Titanic collaborating with Youtube star Lele Pons. He has been starred on Comedy Central’s Drunk History and HBO’s Outpost. He also appeared in YouTube Red’s Keys of Christmas with DJ Khaled and Mariah Carey. In addition, a puppet series on Youtube platform Awkward Puppets, owned by Rudy and his Shots Studios, where he is the host. Besides this, Rudy was also the opener for Justin Bieber’s Purpose World Tour in Brazil’s section of his Latin America shows in 2017.

Excited to announce that I'll be opening for my friend @justinbieber in Brazil. Dream come true

The year 2017 was a happening year as Rudy got many opportunities and achievements which build up his career nevertheless, his single Sirens, released in December 2017 was taken down as a copy from another song Ambulance by Texas rock band ‘Eisley’. On February 22, 2018, he released his second single, Magic in collaboration with his girlfriend, Maia Mitchell. Mama was his first video without a starred artist.

How Much Is Rudy Mancuso’s Salary & Net Worth?

Rudy Mancuso is on an upward trend in terms of subscriptions, having 5.9 Million subscribers till now. Youtube’s average pay for 1K views is about $7.60 and a video with 500k views would have earned approximately $3.80. Also, his views in one video is more than millions.

So, it estimated that Rudy earns a decent sum from his Youtube channel. With all the earnings from Rudy’s YouTube channel, he gets $25 thousand per episode and, charges about $25 thousand as advertisement fee. Moreover, Rudy has different sources of income and his current net worth is estimated to be $2 Million as of 2019.

Rudy is a handsome and stylish star with a height of 5ft 8inches and weighs up to 68 Kg. Furthermore, he has a slim body which measures his chest (40), biceps (14), waist (31) in inches, respectively.

Who Is Rudy Mancuso’s Girlfriend? Know About His Affairs

If you are one of Rudy Mancuso’s fans, then you might surely know that Rudy is currently dating someone special. He is dating his girlfriend, Maia Mitchell, an Australian actress, and also, an singer. The couple started dating in 2015. Their social accounts like Instagram is filled with their adorable couple photos.

Like every relationship, Rudy and his girlfriend, Mitchell have been through ups and downs. Earlier in 2016, the duo even broke-up, but, fortunately, they restored their lost love and romance and came back together stronger than ever. Since then, the pair is still together and receiving huge attention from social media regarding their chemistry.

Despite, Mancuso hasn’t married anyone before and hasn’t linked to anyone else other than his current girlfriend, Maia. But, the main question that comes out of fans mind, “Will Mia be Rudy Mancuso wife in coming days?” Well, who knows?