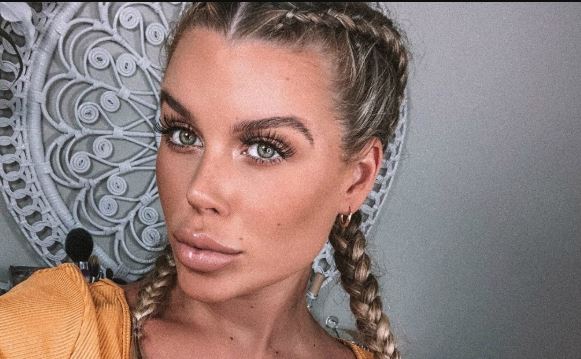 Skye Wheatley is an Australian Youtuber, Model, and Reality Tv Personality. She rose to fame as a competitor on the 11th series of Big Brother Australia. Moreover, she is currently a YouTuber who shares videos of Beauty and lifestyle on her channel.

Furthermore, the 25 years old YouTuber is currently in a relationship with Lachlan Waugh. Also, the couple shares one child from their relationship. Wanna know more about Skye Wheatley?

Skye Wheatley was born on February 20, 1994,  in Gold Coast, Queensland, Australia. Moreover, she was held under the birth sign of  Pisces. Skye has never mentioned her parent’s and siblings’ names on social media. It seems like she is living a low-key life. Despite her fame, the world has yet to know about her origins.

There is no information about her educational background as well. But we found that she is a high school graduate student. Despite that information, she hasn’t revealed much about her personal life, so knowing about her is a bit impossible.

Wheatley started working as a barista at the beginning of her career. She used to do small jobs until, in 2014, she went to a competition as a competitor in the show called Big Brother Australia. Skye was featured in the 11th series of the show, where she was competing against Alisha Jade in the competition.

After the competition, she started her YouTube Channel on December 2, 2014. Most of her video is related to Beauty and lifestyles, where she uploads videos about home tutorials, vlogs, and product reviews. The YouTube star has already gained over 200 thousand subscribers on her channel. And also has over 100 thousand views on her videos. She has gained a lot of followers locally and from around the globe. Jazzman Kendrick, Jasaaelys Ayala Gonzalez, and Loey Lane are other renowned social media personalities.

The 25 years old YouTuber is currently dating a guy name Lachlan Waugh. The couple has been hot and heavy since they first got together in November. Skye and Waugh have been in a relationship for more than a year. However, the couple hasn’t married yet, but they have a son together. On December 24, 2018, the couple got blessed with their child, Forest. Moreover, Skye even shared her pregnancy journey on her social media account.

The couple might have been married secretly, but they haven’t announced their wedding yet. One of the sources, dailymail.co.uk, witnessed that Skye updated her Instagram bio as “Skye Maree Wheatley devoted wife to Lachlan Waugh.” And also, in Lachlan’s profile, he changed his bio to “Happily married to Skye Wheatley.”

However, there has been no concrete evidence about their marriage; they probably married secretly with only a few family members and some close friends.

Skye has made huge earnings from her career as a social media personality. However, she hasn’t mentioned her net worth to the media yet. According to socialblade.com, from her YouTube Channel, Skye earns an estimated $101k to $1.6k monthly. And in a yearly based, she can make an estimated amount of $1.2k to $19.4k.

Furthermore, she might have been associated with other brands and might get sponsored. Thus, Evaluating all of her income from social media over the years and calculating it, Skye’s net worth can be $100k to $200k.

In recent years, the couple has recently renovated their abandoned mansion, which has a value of $1 million. And also reveal just how big their move was, having packed up their entire Gold Coast home total worth $605,000.