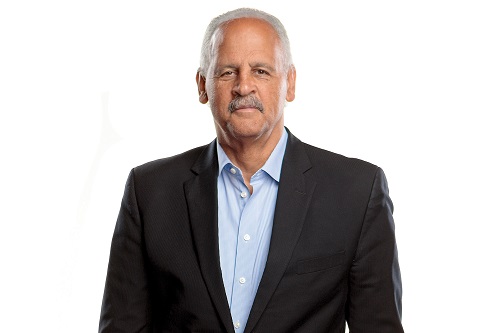 Stedman Graham is an American author, businessman, and speaker. Apart from his profession, he gained further fame after being in a relationship with Oprah Winfrey. Further, the couple engaged in November 1992 and they even planned to get married. However, they did not marry.

The 6 feet 7 inches tall Stedman earns an impressive amount of money. His net worth is estimated to be around $10 Million as of 2019. On the other hand, his partner Oprah’s wealth is $2.9 billion.

Stedman Graham was born on March 6, 1951, in Whitesboro section of Middle Township, New Jersey. He is the son of Stedman Graham, Sr. (father) and Mary Jacobs Graham (mother). Furthermore, Stedman is one of the six children of his parents. He holds an American nationality and belongs to African- American ethnicity.

Is Stedman Graham Married? Who Is His Wife?

The 68 years old Stedman Graham is currently unmarried but he is in a live-in relationship with his longtime partner Oprah Winfrey. By profession, Oprah is an American media executive, actress, talk show host. The couple met each other in 1986 at a charity event. At that time Graham had launched her show The Oprah Winfrey Show.

After dating for a few years Stedman proposed to Oprah in the kitchen of their Indian house in 1992 and got engaged. Even though the couple is already engaged, they are against the marriage so they never shared the wedding vows.

Meanwhile, there were rumors about their secret wedding in 2016. Later, Oprah tweeted denying her marriage on 6th September 2016. Further, the couple has no plans for tying martial bonds with each other. Back in 1993 Stedman and his partner Oprah had a plan to tie the knot however they canceled it because of their busy schedule.

Since then, neither Oprah nor Stedman have shared the news of getting married or having kids.  As of now, the couple is enjoying each other’s company and living a happy life.

Before being in a relationship with Oprah, Stedman was married to Glenda in 1974. The former pair shared the wedding vows in a private ceremony. In addition, the former husband and wife also share a daughter Wendy Graham born in 1975.

What Is Stedman Graham’s Net Worth?

Stedman Graham summons an impressive amount of money through his career as an American educator, author, businessman, speaker, and podcaster. His net worth is $10 Million as of 2019. Currently, Graham serves on the marketing and consulting firm S. Graham & Associates in Chicago.

Further, Graham is also the author of nearly a dozen books from which he probably earned some good amount of moeny. Some of his notable books are You Can Make It Happen Everyday and Huffington Post.

Besides this, his partner Ophra has a net worth of $2.9 billion which makes her sixth on the list of richest self-made women. Further, she is the only African American woman to earn a spot on the list. Winfrey earns a colossal amount of money from her multiple careers including American media executive, actress, and talk show host.

The 65 years old lady Oprah owns a house in Montecito, California called The Promised Land. The current market value of the mansion is $85 million. The 23,000-square-foot home is situated in the area of 42 acres. Similarly, it features 14 bathrooms and 10 fireplaces.

Furthermore, Oprah also has houses in different states and a vacation home in Antigua. In addition, she also owns a private custom-designed jet worth $42 million.