Do you love to listen to Hip-Hop and Rap music? If yes, then you should have listened to the songs of the American rapper and musician, Icewear Vezzo. He is widely recognized for his mixtape trilogy, The Clarity. His single, Money Phone received a huge mass appreciation. Following, he also released the remix of Money Phone.

The 30 years old, Icewear Vezzo is active on different social media i.e. Instagram, Twitter, and YouTube. He has amassed over 71.5K subscribers on his YouTube channel. With no doubt, he gathers a good amount of money from his on-going profession. How much is his net worth as of 2019?

Let’s find out in detail about Icewear’s personal and professional life. Keep scrolling in the lower sections.

You might have heard about many rappers from Detroit, Michigan. Unlike any other Michigan native, Icewear Vezzo started rapping at the age of 12. At a very early age, Icewear recognized his talent in music and started listening to famous rappers like Biggie Smalls, Master P, 2Pac, Jay Z and many others.

Also, Icewear’s family also supported him a lot. He used to spend his time writing and singing rap/hip-hop songs. So far, he has not disclosed his family and educational background.

Icewear Vezzo was involved in a certain type of rap music since the beginning of his childhood. He used to spend much of his time in freestyle music. He rose to fame after releasing his single titled Money Phone on his mixtape Solitaires: Drank God. Nevertheless, his debut mixtape The Clarity was successful to win the heart of the audience in 2012.

After spending some time in prison, Vezzo went to release The Drank God Back Freestyle in 2018. The famous rapper has spread his talent to many parts of his country. Not only this but he has also opened several businesses i.e. a restaurant and a car wash. He has also collaborated a single with the Motown hip-hop producer, Zaytoven.

At present, Vezzo is signed with the Motown Records that he announced on the day of his birthday via Instagram. During a press release, he also stated:

It feels like I play for the Pistons. It’s the home team Motown Records.

Well, Vezzo is enjoying his professional time with the record and will come up with many exciting projects in the near future. He is active on YouTube and keeps releasing new types of hip-hop music.

A Year Stint In Prison

In the year 2017, Icewear Vezzo was sentenced to the prison for 20 months after pleading guilty for possession of a firearm. He was ordered to spend his time at the FCI Morgantown Facility in West Virginia. However, it didn’t take so long for the famous rapper to come out of the prison. And now, he is rising to the peak of stardom.

During an interview with DJ Small Eyes, Vezzo admitted his true relationship to be 12 years long. The long term couple has a very strong bond and it could be the reason for Kiara holding hands of Vezzo all the time.

Going through Vezzo’s Instagram, he has shared a lot of pictures with his two beautiful children. He has a son named Vito and a daughter named Navy. The father of two keeps wishing his kids on occasions like their birthday.

Vezzo has rarely uploaded the pictures of his partner. Whatsoever, the family of four is spending a happy life together. So far, Vezzo has not revealed any conflicts with his spouse that can lead them to their divorce or separation. At present, he has balanced his professional and personal life equally.

The American rapper, Icewear Vezzo recently singed with the Motown Records. Though he has been successful in collecting a hefty amount of money from his profession, he has not yet revealed his net worth in the media. One of his main sources of income is his YouTube where he has over 71.5K subscribers.

According to the Social Blade, Vezzo’s YouTube channel makes between $107 – $1.7K monthly that enables him to earn between $1.3K – $20.5K on a yearly basis. As a matter of fact, he could also make money from his Instagram where he has over 308K followers. For now, he is leading a lavish life without any doubt.

Watch the Music Video of IcewearVezzo 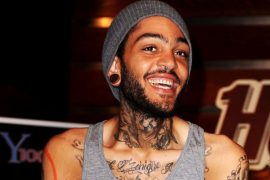