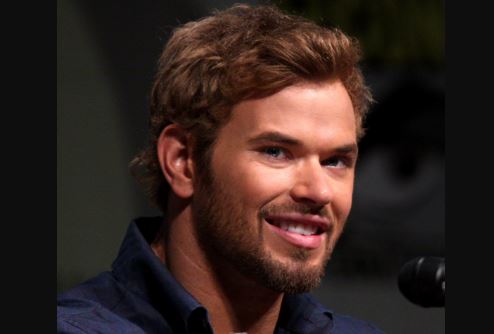 If you have talent and dedication on your respective interesting fields, then it would be very easy to achieve your dreams. Kellan Lutz is one example who professionally started his acting career in 2004 and successfully established his career as an American actor and model. He rose to fame after portraying the role of Emmett Cullen in the American film series, The Twilight Saga (2008-12).

The 34 years old, Kellan is a married man. His wife is Brittany Gonzalez. Does he share any children with his spouse? Moreover, Kellan has collected a huge capital from his long career. Is he providing a lavish life to his family?

Find out in detail about his biography in the lower sections. Stay tuned.

Born in Dickinson, North Dakota, Kellan Lutz raised along with his six siblings in the United States. His father, Bradley Lutz is currently in his late fifties and of German-English descent whereas, his mother, Karla Theesfeld is also around the same age and comes from German-Swedish-Dutch ancestry. Moreover, Kellan raised along with his sister, Brittany and six brothers; Brandon, Tanner, David, Daniel, Brad, and Chris.

Kellan spent his later teenage years in the Midwest and Arizona. He attended Horizon High School in Arizona. Later, he graduated with a chemical engineering degree from Chapman University. During his studies, he had already started his acting career.

After waiting for a golden opportunity for a long time, Kellan finally received a big role of Emmett Cullen in the Twilight Saga film series. He played in all the films of the movie series such as New Moon (2009), Eclipse (2010), The Twilight Saga: Breaking Dawn I (2011), and The Twilight Saga: Breaking Dawn II (2012). He acted alongside his co-stars, Kristen Stewart, Robert Pattinson, Taylor Lautner, Billy Burke, Nikki Reed, Bronson Pelletier, Anna Kendrick, and many others. In 2019, he appeared as Captain F**ktastic in the film, What Men Want.

The American actor, Kellan Lutz is a married man as of 2019. He exchanged his wedding vows with his long-time girlfriend turned wife, Brittany Gonzales. His spouse, Brittany is a TV host and model.

The couple began dating a long time ago and announced of having engagement in October 2017. Since then, they also spotted in Kellan’s film premieres and events. Without giving a hint to the media and their fans, the couple tied the wedding knot in a private marriage ceremony and told the media after being husband and wife for an official on 23rd November 2017.

After two years from their marriage, the couple announced expecting a baby via their respective social media accounts on 28th November 2019. As per their Instagram posts, they are excited to welcome their child in 2020. Since marriage, the couple never disclosed any conflicts that could lead them to their separation or divorce.

At present, Kellan is spending a happy married life with his spouse and family. Besides, he is out of rumors and controversies as of 2019.

It would hardly surprise you all if we say, Kellan Lutz has collected a huge amount of money from his long career and brilliant performances. In fact, his net worth is also mentioned by The Richest which claims his capital to be $5 Million at present.

Moreover, Kellan is also active on charity works and helps “Saving Innocence”, a non-profit organization that rehabilitates child victims and sex trafficking in the United States. Also, he has donated a lot of money to the animal charity, PETA. Without any doubt, he spends a lavish life with such revenue.